Agreement on a simpler employment system (2018)

In August 2018, the government and political parties made an agreement that simplifies the employment system and removes bureaucracy.

A high amount of rules and rigid process requirements for the municipalities has previously complicated the employment system and driven focus away from what best helps the unemployed citizens in finding jobs. Therefore, the government and political parties (Socialdemokratiet, Dansk Folkeparti, Det Radikale Venstre and Socialistisk Folkeparti) has made an agreement that simplifies the employment system and removes bureaucracy.

The agreement is implemented through legislation in the new sessional year, in order for most initiatives to enter into force on July 1st 2019.
The agreement entails that:

The agreement removes bureaucracy and simplifies the rules for unemployed

The employment system needs to ensure that Denmark has a well-functioning labour market where unemployment is low and businesses receive the labour that they need. It has to be beneficial both for citizens, businesses and society as a whole. The government and the political parties recognize that we have a good starting point for providing this. However, they agree that a complex law with much process regulation should not stand in the way of an effective employment system. Thus, the parties behind the agreement have decided to simplify the employment system. The agreement aims to accommodate citizens with fair requirements and to release necessary recourses in municipalities and unemployment insurance funds. The purpose of this is to effectively help unemployed citizens enter the labour market.

The basic elements of the agreement are: 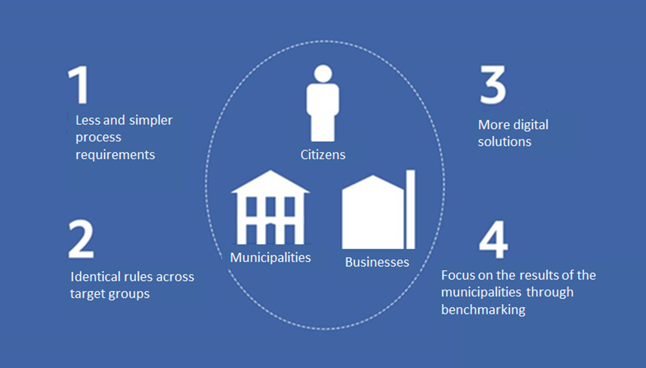 The agreement is implying a higher degree of freedom for municipalities in planning support for unemployed citizens. In the future, minimum rules will be established across target groups, for the purpose of enabling municipalities to plan the action that best fits the individual. Some unemployed may solely need to focus on finding jobs, while others for instance may need an internship or a short training programme early in the unemployment period.

Unemployed citizens will be met with fair requirements and simpler rules. Among other things this entails:

A part of the agreement entails that a selected number of unemployment insurance funds for four years will be responsible for the contact with citizens receiving unemployment benefits, during the notice period and the first three months of unemployment. The unemployment insurance funds will be required to host an interview regarding CV, one regarding availability and the first common interview. Besides that, further interviews with the unemployed take place according to the estimated necessities. The content of these interviews has to be fit the individual’s situation and needs.

Central initiatives in the agreement